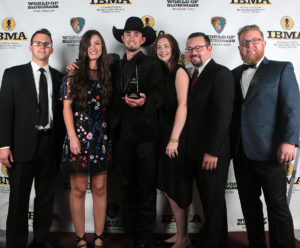 One of bluegrass music’s hottest young bands, Flatt Lonesome has a lot to celebrate this week! The International Bluegrass Music Association (IBMA) has awarded the band Vocal Group of the Year for the second consecutive year after the sextet delivered a jaw-dropping performance of new music from their latest project on Mountain Home Records, Silence In These Walls.

Thousands gathered in Raleigh, North Carolina this week for the IBMA’s annual World of Bluegrass Conference with the genre’s biggest week of the year capped off with the prestigious industry voted awards on Thursday night at the Duke Energy Performing Arts Center. Flatt Lonesome was thrilled to be nominated in two categories this year: Entertainer of the Year and Vocal Group of the Year, and very honored to repeat their win in the Vocal Group category. In addition, the band performed “Where Do You Go,” a Glen Campbell classic, to an auditorium of peers who were hearing first-hand all the reasons this band is taking bluegrass music by storm.

Flatt Lonesome is celebrating their second year of IBMA accolades with the timely release of a new album, Silence In These Walls. The project touts 12 tracks of heartfelt songs showcasing the vocal talents of all three lead singers, siblings Kelsi Harrigill, Buddy Robertson, and Charli Robertson, while equally giving due credit to the musicianship of band members Paul Harrigill, Michael Stockton, and Dominic Illingworth. This is the fourth album for the ensemble that is showing significant musical maturity, masterfully making each and every song their own. Silence In These Walls has already produced a successful first single, “All My Life,” (written by Paul Harrigill and Tim Stafford), that debuted on the Bluegrass Today Top 20 Songs chart just this month.

IBMA nominated Broadcaster of the Year, Steve Martin says, “Silence In These Walls shows the continued development and maturity of an already stunning group of award-winning musicians. Flatt Lonesome is just getting started and their potential is limitless!”

Silence In These Walls is available to consumers via download from various digital outlets and also from the band’s website at www.flattlonesome.com.