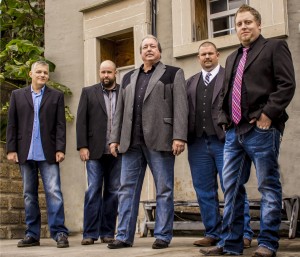 Russell Moore & IIIrd Tyme Out Celebrate 2nd #1 Song  with “I’m Leaving You And Fort Worth Too”
National Bluegrass Survey’s Top 30 Includes Three Singles from Hit Album, It’s About Tyme
One of Bluegrass music’s most iconic bands will kick of their 25th anniversary with unprecedented chart success when Russell Moore & IIIrd Tyme Out begin their “Tyme for 25” tour later this month! Their latest, self-produced album on Break A String Records, It’s About Tyme, is currently enjoying a lengthy stay at #1 on the National Bluegrass Survey’s Top 15 Albums chart December through April, while the album has produced not one, but two #1 singles on the Top 30 Songs chart.
“I’m Leaving You And Fort Worth Too,” written by Russell Moore came out of the gate strong when it was initially released last October and debuted at #6 on Bluegrass Today’s Top 20 Singles chart, rocketing to #1 in November. In addition, the song enjoyed a November debut on the National Bluegrass Survey’s Top 30 Songs chart, making a steady but strong climb to #1THIS MONTH! This makes the second #1 song from It’s About Tyme; the first single, “Brown County Red” reached #1 in March.
Of “I’m Leaving You And Fort Worth Too,” Russell Moore says, “I’ve been writing on this song about 4 or 5 years and am glad it finally found a place on our latest CD, It’s About Tyme! I’ve been wanting to write a song that included references to my home-state of Texas for a long time. I struggled with the 2nd verse but was finally able to finish it when  some Jimmy Martin-esque inspiration came resulting in one of my favorite lines in the song; ‘I miss the way she talks, the way she wiggles when she walks.’ It’s a fun tune for us and according to our live audiences, a home-run with them as well!”
The success of their latest album comes just as IIIrd Tyme Out begins celebrating their “Tyme For 25” tour marking their 25th anniversary. This landmark tour will kickoff with a special extended performance at the Willow Oak Park Bluegrass Festival in Roxboro, NC on April 30th, a LIVE concert broadcast on SiriusXM Bluegrass Junction on May 5th, an appearance with Coffee, Country & Cody on WSM 650AM the morning of May 6th, followed by a special “Tyme For 25 Celebration Concert” at the Nashville Palace (Tennessee) on the evening of May 6th.
For more information on Russell Moore & IIIrd Tyme Out including their hit album, It’s About Tyme and the “Tyme For 25” tour, visit www.iiirdtymeout.com.
Uncategorized