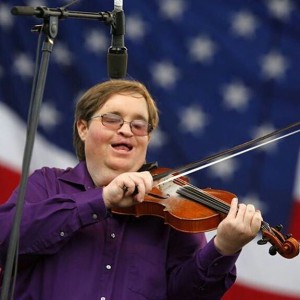 It’s often said these days that if you could figure out and bottle what makes videos go viral online, you’d have a pot of gold on your hands. Every so often, something universal in the human condition is captured digitally, and unimaginable numbers of people respond and share.

We’ve seen it strike the bluegrass world a few times already, with New Jersey’s Sleepy Man Banjo Boys getting millions of YouTube hits, leading to appearances on national television as young boys, now performing simply as Sleepy Man. Similarly, Josh Williams became a YouTube sensation when a small bird landed on his guitar strap at a festival while he was singing, and Ted Lehmann captured it for posterity. It now has two and a half million views.

And it looks like fiddle hero Michael Cleveland is the latest grasser to go the viral route. We had featured a video of him a few weeks back, improvising fiercely on Jerusalem Ridge with Nathan Livers on mandolin. It caught the attention of jazz bassist Mono Neon, who made a mashup up himself jamming along with Michael.

The original video that inspired the mashup was shot by multiple onlookers in the backstage area of ForestFest, held in the Jefferson National Forest near Louisville, Kentucky on May 21. Widely shared on Facebook, it was reposted on June 24 by InspireMore, a site dedicated to inspirational and uplifting media online. There it has been viewed 5.5 million times since the 24th, largely by people who know nothing of bluegrass music, Michael Cleveland, or his well-documented fiddle skills.

From the 7,000 plus comments on the video, it seems clear that most of the people who enjoyed the video were dumbfounded by Michael’s fiddling, and had no idea that fiddle playing like this even existed. While those in the bluegrass world know that Cleveland doesn’t see anything special about himself due to his blindness, much of the rest of the world is in awe of his musical abilities despite the fact of it.

Within a week of the InspireMore video going up, activity on Michael’s Facebook page increased by more than 7000%, with his page likes increasing by 6,000. He has since received a huge number of messages from people all over the world who had never even heard the term “bluegrass” before.

Here’s the video they posted. If you know someone who might be impressed, share it yourself and keep the chain going.

This guy's fiddlin' skills are on !

This guy's fiddlin' skills are on point! Check out Michael Cleveland & Flamekeeper for more!