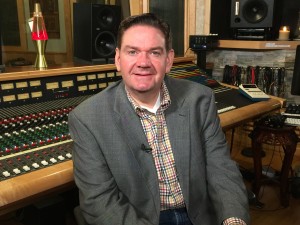 Joe Mullins, who has enjoyed over 30 years in broadcasting through his own network of radio stations in Ohio, joined the Salem Media Group team as host of their syndicated radio show, Front Porch Fellowship, in 2015. In addition to broadcasting, he also fronts his own national touring band, Joe Mullins & the Radio Ramblers, enjoying a full-time career in bluegrass music. Last month, the IBMA Awards nominees were announced and acknowledged Joe in the Broadcaster of the Year category as well as his band in the Gospel Recorded Performance of the Year category for “All Dressed Up,” from their latest Rebel Records release, Sacred Memories. “All Dressed Up” was written by two very well known writers in gospel music, Diane Wilkinson and IBMA Songwriter of the Year nominee Jerry Salley.

Mullins is a second generation broadcaster, following in the footsteps of his father, Paul “Moon” Mullins, and enlists the help of his son, Daniel, also a broadcaster, in co-programming Front Porch Fellowship each week. Additionally, Daniel Mullins is a freelance journalist who contributes to Signing News Magazine monthly. For his work as a journalist, Daniel has been recognized as an IBMA Nominee for Print Media Personality of the Year as well as Best Liner Notes for his work on Rebel Records’ The Blues Are Still The Blues a retrospective collection of music from The Traditional Gass, a popular band from the 1990s featuring Paul and Joe Mullins.

Recently, Joe Mullins visited the Salem Media Group’s Nashville, Tennessee office and was surprised by the staff with a reception celebrating Front Porch Fellowship’s growing list of affiliate radio stations. “Front Porch Fellowship is now heard on 200 stations each week and is featured both Saturday and Sunday on over 50 of those stations, as well as online at singingnewsradio.com. The Southern Gospel world is getting a great bluegrass education and hopefully, plenty of inspiration, too,” states Mullins.
(Joe Mullins and Greg Goodman, Program Director for Singing News Radio)