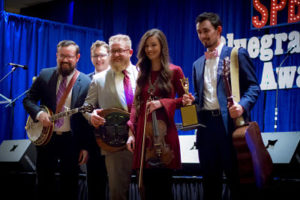 Flatt Lonesome claimed three Society for the Preservation of Bluegrass Music of America (SPBGMA) Awards on Sunday, February 5th during the association’s annual program held in Nashville, Tennessee. The band took home SPBGMA’s Vocal Group of the Year and Bluegrass Band of the Year (Overall), and Charli Robertson claimed Female Vocalist of the Year.

Despite being stricken with the flu over the course of the last two weeks, resulting in band member Kelsi Harrigill missing the events, Flatt Lonesome made multiple appearances during SPBGMA’s four-day conference, including an awards performance and a show for the SamJam Official Showcase. Since the band’s first ever performance was at this same event in 2011, SPBGMA has become a “homecoming” for them and their growing fanbase.

Although only in their sixth year of professional touring, Flatt Lonesome has already gained an impressive list of accolades that include the International Bluegrass Music Association’s (IBMA) 2016 Vocal Group of the Year, Song of the Year for “You’re The One,” and Album of the Year  Runaway Train. Flatt Lonesome is currently in the studio working on a new album for Mountain Home Music Company due for release later this year.

For more information on Flatt Lonesome including a complete list of upcoming performances, please visit www.FlattLonesome.com.