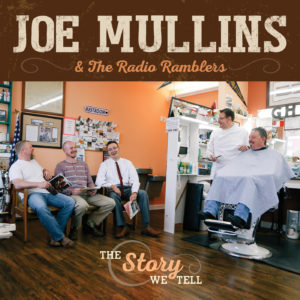 Known for authentic, ground-breaking bluegrass music, Joe Mullins & The Radio Ramblers are riding high on the success of their most recent Rebel Records album, The Story We Tell. Thanks to radio programmers, the album has produced several charting songs including the first single, “Long Gone Out West Blues,” “In The Short Rows Now,” and “When God’s In It.” With the consistent attention the album has received, Rebel Records is announcing the latest focus track, “If I’d Have Wrote That Song,” and requesting radio programmers add it to their regular playlists beginning Friday, January 12th.

Written by hit songwriters Larry Cordle, Larry Shell, and James Silvers, “If I’d Have Wrote That Song” has been a favorite with audiences at Radio Ramblers’ live performances and a top pick among reviewers, as well. David Morris of Bluegrass Today says, “My favorite cut on the record is If I’d Have Wrote That Song. Working stiffs everywhere, not just songwriters, can identify with the frustrated dreams brought to life when Duane Sparks sings, ‘I wouldn’t be driving this truck if I’d have wrote that song. This old baloney sandwich would be filet mignon.’”

Read the Complete Bluegrass Today Album Review Here.
“If I’d Have Wrote That Song” and The Story We Tell are available to radio programmers via AirplayDirect. For more information on Joe Mullins & The Radio Ramblers including upcoming performances, please visit www.radioramblers.com.
Uncategorized