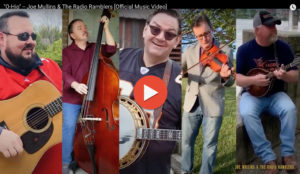 The International Bluegrass Music Association’s (IBMA) Entertainers of the Year, Joe Mullins & The Radio Ramblers, shone a national spotlight on the band’s home state with the release of a brand new video for their popular song, “O-Hio.” In addition to releasing the video on various online platforms, Ohio Governor Mike DeWine gave an impressive stamp of approval by debuting the video during his May 26 Press Conference from the state’s capitol in Columbus.

Joe Mullins, founder and leader of Joe Mullins & The Radio Ramblers, is a native Ohioan residing near Cedarville and has been a recognizable banjo player, vocalist, and radio broadcaster for nearly 35 years. In addition to traveling full-time with his award-winning band, Mullins also owns a network of radio stations in Xenia, Real Roots Radio, broadcasting a wide range of roots music such as classic country, Americana, bluegrass, and gospel 24 hours a day, 7 days a week, and streaming worldwide online and via the Real Roots Radio app. Mullins & The Radio Ramblers record for Billy Blue Records and “O-Hio” is a track from their latest album, For The Record. The song, written by Ohio native Tom Ewing, was recreated by Mullins after encouragement from Ohio First Lady, Fran DeWine, and was debuted when the band first performed it live at the Southern Ohio Indoor Music Festival, an event produced by Mullins and his family and held twice annually in Wilmington at The Roberts Centre.