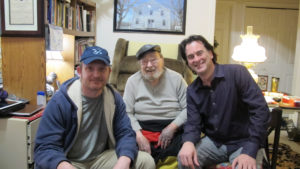 A Slice of Life: A Conversation with Mac Wiseman by Jospeh Terrell for Bluegrass Situation

Members of Bill Monroe’s Blue Grass Boys — and there were more than 150 of them during his half-century career — often started their own bands in the style of their mentor. This was a huge part of Monroe’s influence: He was both bandleader and charismatic evangelist, training future bandleaders to preach bluegrass in a Monroe-style band of their own. His star students (Jimmy Martin, Lester Flatt, Earl Scruggs, Carter Stanley, Del McCoury, Peter Rowan) started their own influential bluegrass bands — not carbon copies, of course, but homages to the Founding Father’s vision. It was an apprenticeship model.