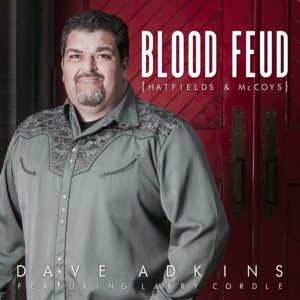 The legendary feud between the Hatfields and McCoys has been a popular topic of American folklore for well over a century, even spawning a television mini-series in 2012. But not until two of bluegrass music’s most beloved writers and singers teamed up, has this true story of two gun-wielding families been more enjoyable. The infamous feud took place on the Tug Fork of the Big Sandy River which borders Eastern Kentucky and West Virginia. With both Adkins and Cordle hailing from that part of the world, the feud was, of course, big interest to them.

“After our initial conversation about the song idea and Dave singing me what he already had, I just was hoping, HOPING that I’d get a chance to co-write the piece with him,” says Cordle. “We had done our homework. I bought four books on the feud from Amazon and Dave had a script that his daughter played the tragic part of Roseanna McCoy in. We read the whole play and all the books before convening the writing session. We were prepared.”

“Writing ‘Blood Feud’ with Larry Cordle was a dream come true,” says Adkins. “To have him sing this song with me on my new record is a check off of my bucket list. Thankful, blessed, and grateful are just a few of the words to describe how I feel about having Larry’s help in bringing life to this song. The time we spent researching, reading, and discussing the story was so worth it to me and I hope it is to everybody that hears it.”

Blood Feud (Hatfields and McCoys) by Dave Adkins and featuring Larry Cordle is available to radio programmers via AirPlay Direct or a digital download by emailing a request to radio@mountainfever.com. Consumers may purchase the new single now through various popular music outlets. To view a full tour schedule for the Dave Adkins Band, please visit www.daveadkinsmusic.com. For more on Mountain Fever Records, visit www.mountainfever.com.
Uncategorized