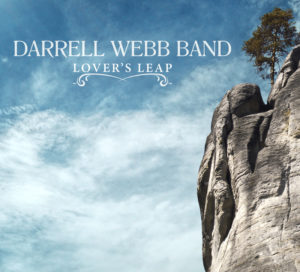 Mountain Fever Records is proud to announce the release of brand new music from the Darrell Webb Band. The band’s sophomore release, Lover’s Leap, is available to radio and consumers today!

Darrell Webb has been touted as one of the best modern day vocalists in bluegrass. He’s been performing professionally for over 20 years, much of that as part of notable bands such as Lonesome River Band, Wildfire, Michael Cleveland & Flamekeeper, and Rhonda Vincent & the Rage. So when he stepped from the shadows to try his hand at fronting his own band in 2009, there was little doubt he would be successful. His 2014 debut release with Mountain Fever Records, Dream Big, served him well with airplay resulting in eight Top 10 charting singles, and a performance schedule that kept his band quite busy. Since then, he’s reconfigured his group to include Tyler Collins (Dobro), Jacob Shelton (bass), Jared Hensley (guitar), and Collins Miller (banjo). With a strong sound and renewed enthusiasm, the DWB headed back into the studio for their sophomore release, Lover’s Leap.

“Each appearance of the Darrell Webb Band we’ve seen in the past few years has been a high energy, driving show featuring his increasingly tight band,” says journalist Ted Lehmann.  “The band combines bluegrass classics with contemporary songs fitting Darrell’s personality. His animation on stage has increased greatly as has his confidence in his own leadership and the quality of his band. In addition to strong musical selections, the band is entertaining and lively.”
Lover’s Leap features three tunes penned by Darrell Webb and is a perfect blend of tradition and innovation with stellar musicianship and Darrell’s unmistakeable vocals. Lover’s Leap is now available to radio via AirPlay Direct or a direct digital download by emailing a request to radio@mountainfever.com. Consumers may purchase the album via iTunes, Amazon, and Google Play. For more information on the Darrell Webb Band, www.darrellwebbband.com. For more on Mountain Fever Records, visit www.mountainfever.com.
Track Listing:
Uncategorized