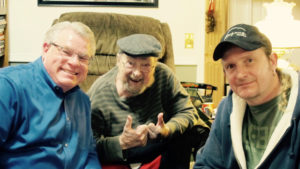 SiriusXM Bluegrass Junction will feature a special program with Country Music Hall of Fame and Bluegrass Hall of Honor member, Mac Wiseman. Program host, Kyle Cantrell, will play the new Mountain Fever Records release, Mac Wiseman – I Sang The Song, in its entirety along with an exclusive interview previously recorded with Wiseman and one of the album’s producers, Thomm Jutz.

Produced my Wiseman, Peter Cooper and Thomm Jutz, Mac Wiseman – I Sang The Song is the life story of Wiseman written by the three men over the course of nine Sunday afternoons. The collection of songs feature performances by John Prine, Jim Lauderdale, Sierra Hull, Alison Krauss and a host of other Wiseman fans. To date, the album has produced several chart-making hits including the first single, “Going Back To Bristol,” as performed by Shawn Camp, which reached #1 on the Bluegrass Today Top 30 Songs chart. The album is currently #7 on the National Bluegrass Survey’s Top 15 Albums chart. For more information on Mac Wiseman – I Sang The Song, please visit www.MountainFever.com.