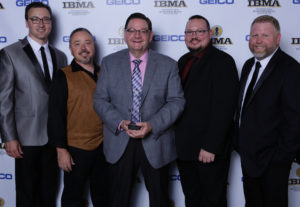 EPR Artists took home a total of FIVE IBMA Awards including Mullins & The Radio Ramblers being crowned Entertainer of the Year! The International Bluegrass Music Awards, part of the annual week-long World of Bluegrass Conference, were held at the Duke Energy Performing Arts Center in Raleigh, North Carolina. Awards were voted on by the professional membership of the International Bluegrass Music Association (IBMA).