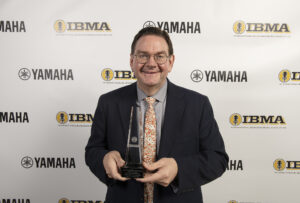 Industrial Strength Bluegrass: Southwestern Ohio’s Musical Legacy was named the International Bluegrass Music Association’s Album of the Year during a ceremony last night in Raleigh, NC. Joe Mullins who produced the album released on Smithsonian Folkways earlier this year, accepted the award and expressed heart-felt gratitude upon receiving the honor.

Industrial Strength Bluegrass is the story of bluegrass’ transformation from a music to a movement, carried north by Appalachians seeking a better life in the booming post-WWII factories of Southwest Ohio. The 16-song collection was produced by Mullins whose father – fiddler and radio personality Paul “Moon” Mullins – made that journey and helped found the region’s bluegrass scene. The compilation (companion to the new book of the same title from University of Illinois Press) presents Southwest Ohio bluegrass classics remade by an all-star cast featuring Country Music Hall of Famers the Oak Ridge Boys and Vince Gill, Bluegrass Hall of Famer Bobby Osborne, and many of today’s finest bluegrass and Americana artists including Lee Ann Womack, Dan Tyminski, The Isaacs, Sierra Hull, and more.

This historic album debuted at #3 on Billboard’s Top 10 Bluegrass Albums, reached #1 on SiriusXM’s Bluegrass chart and is currently resting at #1 for the second consecutive month on the National Bluegrass Survey’s Top 30 Albums chart.

In homage to the pioneers who established Southwestern Ohio as one of the most significant markets in bluegrass history, Mullins has rebranded his long-running twice-annual music festival as the Industrial Strength Bluegrass Festival and expanded it to three-days, making it the largest indoor music festival in Ohio. The event will take place in Wilmington, OH November 11, 12, & 13, 2021 with hosts Mullins and his band the Radio Ramblers, and will feature performances by Doyle Lawson & Quicksilver, The Quebe Sisters, Bobby Osborne, and more. A spring festival is planned for March 24 through 26, 2022.