Joe Mullins & The Radio Ramblers Coming Soon To a TV Show Near You! 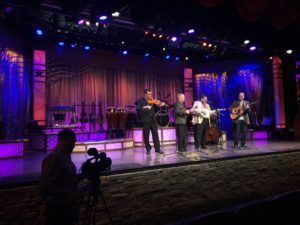 While performing in Branson, Missouri for Silver Dollar City’s Bluegrass & BBQ recently, Joe Mullins & The Radio Ramblers headed to Presleys’ Country Jubilee to be part of their show that airs on RFD-TV. The Presleys are some of the kindest folks you can imagine and JMRR were thrilled they extended the invitation to be part of their decades long family tradition of presenting quality entertainment on the Branson Strip.

Later on Wednesday evening, they met up with The Chapmans at The Acoustic Shoppe where John, Jason, and Jeremy have a wonderful music store showcasing a nice selection of instruments. The Chapmans host bands occasionally to tape shows for The Ozark Music Shoppe series that airs on Springfield, Missouri’s CBS station, KOLR. Additionally, The Chapmans post their shows to their YouTube channel.