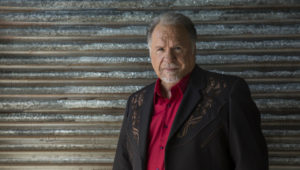 Founded in 1980, the Milan Bluegrass Festival located at KC Campground immediatley offered premier talent including the father of Bluegrass, Bill Monroe. But the festival took a 10-year hiatus in 1986 after the passing of the campground’s owner. Gaynier purchased KC Campground in 1996 and officially launched the festival once again beginning in 1998. Since then, Gaynier has grown the campground and festival attendance by adding additional camping sites for RVs and car parking, and improved the event’s stage and audience area. 2017 will mark the 20th festival produced by Gaynier who wanted to commemorate the milestone with a special event. “We had originally planned to have Daryle Singletary, but due to unforeseen circumstances beyond our control, he is no longer available to us,” stated Gaynier. “So when we began thinking about the longevity and history of our festival, it made perfect sense to bring Gene Watson in as our Saturday night headliner. He’s a country music legend with decades of hits—23 Top-Ten to be exact—and his recent recordings and appearances with the “Queen of Bluegrass,” Rhonda Vincent, has brought him a ton of new fans who happen to be the very patrons we attract at our festival. Classic Country and Bluegrass are a perfect marriage, and we’ll have them both at our festival this year!”

In addition to Watson, the festival will offer an unprecedented lineup of top-notch talent including the Thursday, Friday and Saturday Bluegrass headliners, Lonesome River Band, Russell Moore & IIIrd Tyme Out, and Rhonda Vincent & The Rage, respectively. Rounding out the lineup are The Grascals, Flatt Lonesome, Joe Mullins & The Radio Ramblers, Michael Cleveland & Flamekeeper, Nothin’ Fancy, Becky Buller Band, Breaking Grass, Mountain Faith, Volume Five, Trinity River Band, and Chasin’ Steel. Also included in the program is Master of Ceremonies, Blake Williams, who first performed at the festival in the 1980’s as part of Bill Monroe and The Blue Grass Boys. The Milan Bluegrass Festival runs August 3rd through 5th, 2017 and is located at KC Campground, 14048 Sherman Road in Milan, MI. For more information on tickets, camping reservations, and general inquiries, please visit www.milanfestivalseries.com/bluegrass-festival or call (734) 439-1076.
Uncategorized