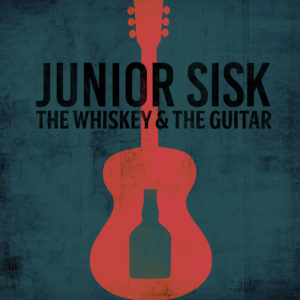 “The Whiskey & The Guitar” Available to Radio Today!
New Album Drops June 8th A Brand New Shade Of Blue
Junior Sisk is back at it with new music, available today on Mountain Fever Records. “The Whiskey & The Guitar” is the first single from an upcoming solo album due June 8th. The single drops to radio and is available to consumers today.
Crowned the International Bluegrass Music Association’s Male Vocalist of the Year in 2013, Junior Sisk has been consistently championing traditional bluegrass his entire career. With an armload of songs he’s been collecting for some time, he went back into the studio to work on his first ever solo record, this time in Nashville, TN with producer Thomm Jutz and Mark Hodges at the helm. With Junior’s vocals at the forefront, the solo album includes musicians Ashby Frank, Mark Fain, Justin Moses, Jason Carter, and Thomm, while incorporating more brother-style duet harmony on the majority of the material. To accomplish the goal, special guest vocalists include Tim Massey, Del McCoury, Marty Raybon, Tim Raybon, Daniel Salyer, as well as an appearance by bluegrass songbird Heather Mabe.
Written by Marc Rossi and Jeff Walter, the first single, “The Whiskey & The Guitar” is presented from the perspective of the two inanimate objects arguing over which the singer loves most. It’s a battle of clever lyrics underscored by a peppy melody that masks the deeper sadness the listener will feel when they realize the song indicates the singer has no human connection with anyone.
“The Whiskey & The Guitar” by Junior Sisk is available to radio programmers via AirPlay Direct or a digital download by emailing a request to radio@mountainfever.com. Consumers may purchase the new single now through various popular music outlets. To view a full tour schedule for Junior Sisk, please visit www.juniorsisk.us. For more on Mountain Fever Records, visit www.mountainfever.com.
Uncategorized