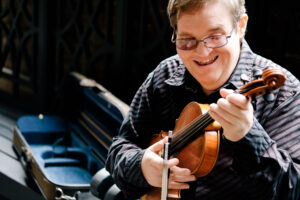 The National Endowment for the Arts is continuing its long history of honoring America’s rich, artistic heritage with today’s announcement of the 2022 NEA National Heritage Fellowship recipients which includes virtuosic fiddler, Michael Cleveland. This year marks the 40th anniversary of the program, our nation’s highest honor in the folk and traditional arts. A film celebrating the 2022 class of artists and tradition bearers will premiere in the fall on arts.gov.

“In their artistic practices, the NEA National Heritage Fellows tell their own stories on their own terms. They pass their skills and knowledge to others through mentorship and teaching,” said National Endowment for the Arts Chair Maria Rosario Jackson, PhD. “These honorees are not only sustaining the cultural history of their art form and of their community, they are also enriching our nation as a whole.”

Widely considered the bluegrass fiddler of his generation, Michael Cleveland has been recognized 12 times as the International Bluegrass Music Association’s “Fiddler of the Year” and in 2018 was inducted into the National Fiddler Hall of Fame. His recording Fiddler’s Dream was nominated in 2018 for a GRAMMY Award® for Best Bluegrass Album, and in 2019, he won for his album Tall Fiddler. In 2019, Cleveland’s amazing life of adversity and achievement was featured in the documentary film Flamekeeper: The Michael Cleveland Story.

For more on the NEA National Heritage Fellowship and a complete list of 2022 recipients, visit arts.gov. For more on Michael Cleveland, visit michaelclevelandfiddle.com.