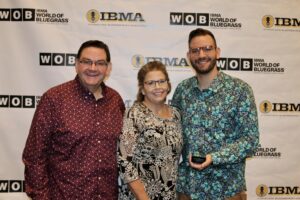 The International Bluegrass Music Association (IBMA) presented their industry awards in September and named Industrial Strength Bluegrass as Event of the Year.

Producer, radio broadcaster, and bluegrass musician Joe Mullinsestablished the Southern Ohio Indoor Music Festival in 2003 and in 2021, expanded the event to a three-day festival, re-branding it as the Industrial Strength Bluegrass Festival. The twice-annual event is the only indoor bluegrass, old-time, gospel, and roots music event of this caliber in the region and features nationally-known, award-winning acoustic acts from bluegrass pioneers such as Paul Williams and Doyle Lawson, to rising stars such as The Caleb Daugherty Band and The Po Ramblin’ Boys, to modern contemporaries such as Ricky Skaggs and Rhonda Vincent. The festivals are sponsored by Mullins’ network of southwest Ohio radio stations, WBZI, WEDI, and WKFI, collectively referred to as Real Roots Radio.

While Mullins and his band, the Radio Ramblers are the hosts of the event, he was quick to shine a spotlight on his wife Tammy, and son Daniel, for the roles they play in the production. “The foundation this festival has been built upon was put in place by my wife Tammy,” stated Mullins during his acceptance speech. “Daniel has done a great job re-branding and producing the event over the last few years, but the chief builder is right here, my wife.”

The next Industrial Strength Bluegrass Festival will take place November 10th, 11th and 12th, and will feature Dan Tyminski, The Del McCoury Band, The Grascals, and more.