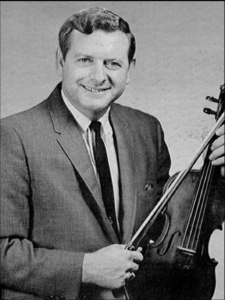 Ohio radio legend and musician, Paul “Moon” Mullins was inducted into the Bluegrass Music Hall of Fame during the IBMA’s Awards presentation in September with Mullins’ two children and their families present to accept the posthumous honor.

“Moon” was a renowned radio personality and fiddler from the late 1950s until he retired in 2005. In 1960 Mullins began his broadcasting career as a full-time, on-air personality, working at stations in eastern Kentucky. His unique broadcasting style was developed at WGOH in Grayson, WMST in Mt. Sterling, and WTCR in Ashland, before his move to Ohio in 1964, where Mullins joined the staff of WPFB in Middletown. The nickname “Moon” (derived from a vintage comic strip) caught on quickly after a few months on-air in Ohio. Mullins introduced bluegrass to tens of thousands of listeners in the Cincinnati-Dayton region of Ohio, and promoted hundreds of concert appearances for Ralph Stanley, the Osborne Brothers, the Country Gentlemen, J.D. Crowe, the Lost & Found, and more.

Accepting the honor on Mullins’ behalf were his children, Joe Mullins and Christy Mullins Jones, both Ohio residents.

For more on Paul “Moon” Mullins” visit RealRootsRadio.com. For more on the Bluegrass Music Hall of Fame and Museum, visit BluegrassHall.org.